Double Trouble – Amazing True Story of the After Dark Bandit

Your book is personally signed by Geoff Wilkinson

It was a crime spree like no other. One of the great double acts in Australian criminal history led police on a merry chase for more than two years. And all the time police thought they were chasing one man. There were two, maybe three robberies a month but only in the colder months. Country TABs and banks were always hit near closing time with the After Dark Bandit then disappearing into the bush. No clues, no leads, no hope.

It wasn’t until the gig was up – thanks to the unflinching bravery of a couple of old school country coppers (one who almost died) that police discovered that the After Dark Bandit was both public enemy no.1 and no.2!

Double Trouble chronicles the journey of Peter and Doug Morgan and their notorious dad who taught them how to build houses and steal stuff. So many twists and turns along the way, including the startling revelation that the only time the identical twins ever got along was when they were doing holdups. 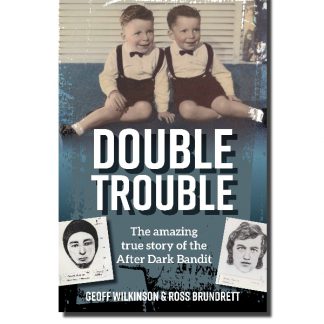 You're viewing: Double Trouble – Amazing True Story of the After Dark Bandit $29.00
Add to cart